AP U.S. History Exam: 3 Hours and 15 Minutes
The AP Exam questions measure students’ knowledge of U.S. history and their ability to think historically. Questions are based on key and supporting concepts, course themes, and historical thinking skills.
The Exam includes both a 105-minute multiple-choice/short-answer section and a 90-minute free-response section. Each section is divided into two parts, as shown in the table below. Student performance on these four parts will be compiled and weighted to determine an AP Exam score.​ 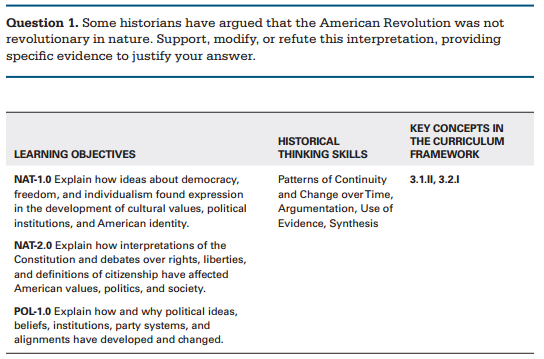 A Good Answer Will Include:
A good response to this question will support, modify, or refute the interpretation that the American Revolution was not revolutionary in nature. An essay supporting this interpretation would craft an argument using specific evidence that shows the American Revolution did not foster revolutionary change but instead maintained continuity. Although not required to do so, a good response might also acknowledge that the situation is nuanced and to some degree ambiguous. The essay might therefore contend that for the most part, the historical evidence supports the claim made in the question stem, while pointing out that some contrary evidence exists as well.

​In supporting the interpretation, a good essay might cite historical facts from any of a number of appropriate areas. It might note, for example, that the outcome of the American Revolution saw no broad change in the composition of those who dominated the social, political, and economic structure of the former colonies. Those individuals who were wealthy, powerful, and influential before the event continued to possess wealth, power, and influence later. George Washington, John Adams, and Thomas Jefferson could serve as examples. This approach would argue that the Revolution was basically a revolt by colonial elites against the elites in England.

​Another analysis supporting the assertion made in the exam question might draw upon the work of historian Charles Beard, who famously argued that the creation of the Constitution in the late 1780s was a counterrevolution. Beard contended that the Constitution was created to maintain commercial and landowning elites’ power, influence, and standing in the face of events such as Shays’s Rebellion and other attempts at revolutionary change. Note that since the question does not confine the response to a particular time period, it would be appropriate to cite events and other evidence from the 1780s in the essay.

Other good responses might analyze the absence of revolutionary change for groups such as women, slaves, and Native Americans following the Revolution. In the case of women, the revolutionary rhetoric about natural rights did not result in their obtaining political or economic independence. Neither did the Revolution significantly change the plight of most slaves. While Northern states began to outlaw slavery, the vast majority of slaves lived in Southern states where their conditions were largely unchanged. Native Americans actually lost liberty.

Conversely, a good response might take the opposite approach and refute the assertion cited in the exam question, using persuasive evidence to contend that the Revolution was revolutionary in nature and that significant change did occur. This argument could point to a significant change in government, in that the Revolution did away with royal power and authority and instead substituted written state constitutions guaranteeing a republican form of government. In a similar vein, a good response might note that the Revolution did away with certain aristocratic practices such as primogeniture (which limited inheritance of land to the eldest son). This led to the possibility of a greater dispersion of the ownership of land.

Other appropriate arguments refuting the interpretation might assert that the Revolutionary period resulted in the spread of American democratic culture. The rise of pamphleteer prior to the Revolution indicated democratization in politics, as did the growing enfranchisement of citizens. A good response might point out that voter participation grew immediately before and following the Revolution, setting the stage for even greater democratization in the early 19th century. Natural rights rhetoric about liberty and equality, furthermore, gave women and African Americans a basis for combating legal inequalities that limited their roles in society.

Finally, a good response might instead choose to modify the interpretation presented in the question. In all likelihood, this approach would emphasize that the totality of evidence is not clear-cut: that the American Revolution was in some ways revolutionary but in other ways was not. To make this argument, a good response would probably select facts supporting each of the two possibilities listed above, presenting proof that the Revolution was ambiguous.

​In all of the above cases, a strong response will demonstrate knowledge of relevant chronology and incorporate a detailed understanding of historical events, arguments, and circumstances.
Example 2 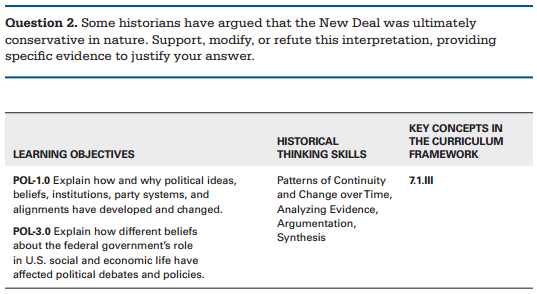 A Good Answer Will Include:
This question is similar to the first one in that it involves a historical interpretation and requires students to use the historical thinking skills of argumentation and patterns of continuity and change over time, but it focuses on a very different time period. Overall, the principles for crafting a good response to this question are the same as those explained for question 1. Once the student has developed the appropriate thesis for the essay, he or she must create a solid historical argument based on specific evidence, as noted at the end of the question.

​A good response that supports the interpretation presented in the sample question might argue that Franklin Roosevelt’s New Deal in the 1930s was ultimately conservative in that it preserved the capitalist economic system in the United States by implementing programs to eliminate the worst weaknesses in that system or at least minimize their deleterious effects. The federal government did intervene in the economy and created a limited welfare state through agencies such as the Agricultural Adjustment Administration, the Tennessee Valley Authority, the Works Progress Administration, and the Federal Deposit Insurance Corporation. A student might argue, however, that the result of that intervention was to preserve the system of capitalism that had developed over the history of the nation, and so therefore could be considered a conservative approach. Government had intervened, but in the name of continuity for the economic system itself.

More, or different, argumentation along that same line might point out what the New Deal did not do that would have been revolutionary had it happened. For example, a student might contend, as some historians have, that none of the programs or agencies in the New Deal brought about a fundamental redistribution of income, land, or other wealth in society. Those elements of the capitalist system remained largely untouched, even if some adjustments such as Social Security occurred. Because it did not take some actions, then, the New Deal conserved (and reformed) capitalism.

A student might decide, on the other hand, that the interpretation in the exam question ought to be refuted — that the New Deal was not conservative but instead did institute substantial change. A good response taking this approach might maintain that the New Deal marked a sharp departure from the role government had played in the economy historically, and certainly in the 1920s. This response might reason that New Deal programs and policies were revolutionary in a positive way, by providing relief to people experiencing economic distress, seeking ways to curtail corporate abuses and malfeasance, and utilizing measures to protect the environment. A permutation of this response might claim that government intervention in the New Deal was substantial but had negative effects. A student making this argument might stress that some programs offered substantial change but were eventually ruled to have exceeded authority permissible under the Constitution, as happened to the National Recovery Administration. The student might contend that New Deal programs such as Social Security represented a considerable change in governmental philosophy but bordered on socialism. Or he or she might conclude that New Deal programs took revolutionary actions that actually worsened the effects of the Great Depression for some people and groups, such as business owners. Either argument would maintain that the interpretation referred to in the exam question ought to be refuted.

Furthermore, since the exam question does not provide chronological limits, it would be appropriate to cite evidence analyzing the effects of the New Deal in a broader chronological framework. For example, a good response refuting the interpretation presented in the question might note that although New Deal programs did not completely eradicate the Great Depression, they did, in the long term, provide greater financial security for some individuals, significantly strengthen regulatory mechanisms, and raise expectations about government involvement in the economy. A student taking this approach might also observe that the New Deal eventually led to a significant political realignment in which groups that supported greater government intervention, such as African Americans, many ethnic groups, and working-class communities, developed a strong allegiance to the Democratic Party, a realignment that lasted for decades.

Of course, it would be equally acceptable for a student to conclude that the strongest argument in response to this question would modify the stated interpretation. A good response along these lines, for instance, might take the position that the New Deal followed a middle course between individuals and groups calling for far more radical actions in the economy than the New Deal proposed (citing Huey Long or the Congress of Industrial Organizations) and those who were highly critical of the New Deal for deserting the principles of capitalism (as charged by many conservatives in Congress and the business minded American Liberty League).

​Finally, a good essay taking any of the three positions will include contextual material, too. Students might mention the largely conservative fiscal policies of Roosevelt’s immediate predecessors, the Great Depression, the Dust Bowl, or World War II. References to relevant context can strengthen an analysis as well as demonstrate a student’s ability to use another valuable historical thinking skill.

You will notice that 3 varieties of review can be found below.  Please choose ONE review to use; picking more than one will be too much to complete.  Once you have chosen your review, download this file onto a device that can be brought to school with you as you will be working on these reviews during the week leading up to the national exam.  Happy studying!! :)
The following files are pieces to one complete review.